Using the Inquiry Model in a Core French Class

This week during our staff meeting our team was introduced to the Student Inquiry Model.  I was very interested in this topic, as I have seen it used (and used it myself with my gifted class.)  I was wondering how this framework could be used in a Core FSL class, especially since my students have a very limited use of French.

The student inquiry model is heavily focused around talking; teachers are expected to give students opportunities to share their learning in very step of the project.  Students are asked to revisit steps when new information surfaces, and they are expected to demonstrate their learnings in new ways.  If you are interested in some more information about this model, the MOE has a great monograph (October 2011, ISSN: 1913 8490 or French version click here) as an introduction for the model.

I had some reservations about trying this in my FSL classroom.  My concerns were similar to a lot of Core French teachers: do my students know enough of the language to make this activity useful? Will they be engaged in another language?  Will they be successful?  Can they stay focused while researching in French?  Will they understand the materials they find?  I thought the best way to solve these issues would be to work through it.  So I tried an inquiry activity with my Grade 5 Core French class.

In order to set up an Inquiry activity for my students, I went to the MOE monograph and looked at the parts that could specifically be applied to Core FSL.  In the first step a topic of inquiry has to be chosen.  In order to peak my students curiosity, I created some interest in my classes prior to the inquiry.  I picked the students up from their lines and brought them into the school while wearing a very fancy mask.  When they got into the classroom, I had some music playing ("Beau's Mardi Gras" from the album Mardi Gras in New Orleans by Rounder Records).  They students wanted to know what was going on.  I refused to answer any questions until our entry routines were finished. 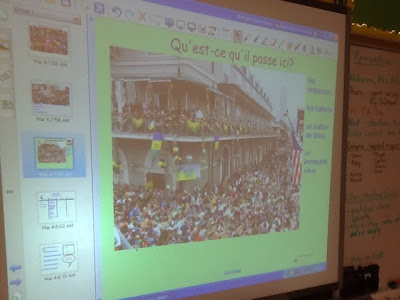 Even thought I chose the focus, the students were interested in what was going on.  I told them it was a special day-- it was Mardi Gras.  Living in Canada, students had little prior knowledge about the event, so I had to provide some.  An important sidebar:  Teaching in the inner city, my students have very different experiences, and sometimes do no process the prior knowledge for some of our lessons.  In these cases, its important to make the experiences for them, and to provide them with some prior knowledge.  I brought my own mask and some beads from the last time I was at Mardi Gras in New Orleans.  Additionally, I showed the students some pictures, and we answered some basic prompted in French:  Qu'est-ce que tu vois?; Qu'est-ce qu'il passe? The students were able to point out the items they recognized in French, and answer the questions simply.  One of my students saw a disco ball, and commented that there was "un ballon de disco a l'image."

After the picture activity, the students were interested in why such a big party occurred. Using a simple information log, we wrote down what we knew/saw and what questions we had.  Students had some great questions that they could state simply.  They asked, "Pourquoi la fete s'appelle 'Mardi Gras'?"; and "Ou est Mardi Gras?"  I added one question, "Pourquoi est-ce que nous étudions cette fête à la classe de français?" 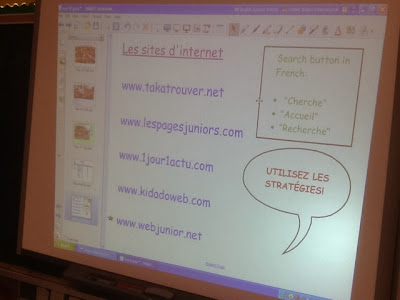 Next was the "explore" step.  This was the step that I was most anxious about.  In order to prepare students for "recherche" we had a crash course on French website terminology, and we discussed which of our comprehension strategies would be best for this activity.  I also only allowed students to use the websites that I listed for research.  I wanted to make sure that they were not only looking at French websites, but I wanted them to be successful, so I had made sure that there was information on the sites I chose.

In order for the students to be successful, I searched for some helpful French  sites to guide the students in their research  I posted the websites on the Smart board, and had them in a Nearpod lesson for my students who needed more support.  The main sites that the students used were: 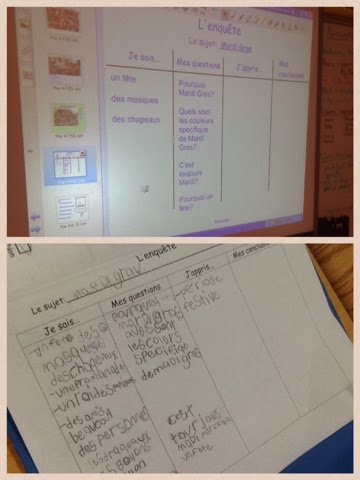 Students were tasked with answering the questions we came up with.  After they did that, they were able to add any additional information that they thought was interesting.  They added this information to their graphic organizer.  To differentiate this part, some groups were tasked with finding "mots amis" or cognates in their searches-- they were still able to find information about Mardi Gras, but they were only focused on using one of the strategies.  This was less overwhelming for some of my students with more challenges.  The differentiate in the other direction, students were allowed to search Wikipedia.fr for additional information or connections.

The analysis step was built into our first two steps:  What I wanted them to find out was what does Mardi Gras have to do with French class?  Many students found the Cajun influence in the festival.  Which is a great frist step.  I found that I had to lead them with questions like, "Who were the Cajuns?" And, "Why are they in the United States?" Making these connections was difficult for some of the students.  And we will have to revisit our answers again in another class.


To share our learning, we held a "knowledge congress."  We sat in our groups, and each group was expected to share their findings. During the first congress, there was not much to share.  Students had only found answers to the first questions about the name Mardi Gras and the reason for the party. As a class, we decided that we needed to do more research, and so we went back to the "Explore" step.  Which was were we were at March Break.  We are not finished, and I think this is a project that will be ongoing.  I think that students enjoyed this-- they would come up to me and share what they found.

I worried about doing this because I was sure that the students wouldn't focus, or understand.  In reality, they did have difficulties but the challenge was manageable.  I had to keep reminding them to use their strategies, and to look for keywords, like they would if they were searching in English.  It was a great activity in getting the students to make connections to the literacy strategies they use in English, and how helpful they were in French class.  At one point a students was complaining to me and I asked her, "what did I say yesterday?"  She replied, "Stop whining, use my strategies?"  That's right.  And she did.  So that's progress.

I also was not sure what our focus should be, as I spend most of my classes trying to engage students in using our vocabulary, and teaching them how to use/ speak French.  In a meeting, it was suggested to use the lessons on French culture as a springboard into inquiry.  So I thought Mardi Gras was a great entry point as it has the possibility of opening up a great discussion of the Cajuns, and ultimately the Acadian disapora.

The connection of the Cajuns to the Acadians is a great example of higher-order thinking/ connecting and in line with the curriculum in FSL.  I was especially worried that there wouldn't be that use of higher-order/ critical thinking in this activity as the students have limited French skills.  But, students were finding information and inferring the meaning of things based on the vocab they knew.  They were applying their comprehension strategies, and trying to answer a fairly difficult question in their L2.  Additionally, students had to decide which of the resources they were using were useful and which one's were not.  There were many examples of critical thinking in this activity.

What I was most happy to see were many of my students were working together, and sharing information they found.  It was great to see students helping each other, and wanting to find the answers instead of just finish their work.  As I worked with my more challenged students, we looked at the cognates we collected, and they were able to draw a conclusion from the word they found.  They were able to contribute in the congress, which is exciting.

To be honest, I wasn't sure if an inquiry activity was going to work in my French class.  But it turned out to be a great learning experience for me and my students.  It is an especially usful strategy for exploring French culture.  I am thinking of some other ways to try and use it in the FSL classroom.  An inquiry  for skills-acquisition? Would that work?  What are some ways that you have infused inquiry into your L2 classroom?  What else can I try?

A resource to help you teach about Haïti in an intercultural way!